The MultiValue world is evolving — slowly, very slowly. The upper management in many of our companies are beginning to appreciate that the way to the future is based in understanding what is happening in software development. It's not just MultiValue development, they are looking at the entire IT marketplace.

In order to appreciate what is happening today we can look back at the history of a U.S. business to understand the disruptions technologies have caused. In the 1800s there was Sears, Roebuck and Company, a small retail business in Chicago, IL.

Someone came up with the clever idea to put all the products they sold into a book. They called the book a catalog. It came from an understanding that there was a need in rural America for people to buy lots of stuff they could not buy at the general store.

Sears shipped catalogs to every person they could find across rural America. Those people liked what they saw and ordered stuff from the catalog. Sears had to hire new people to open envelopes, put money into a pile, place orders into another pile, pick product, pack product and ship product. This idea — selling through a catalog to rural America — caused a shift in the way people bought stuff, and not just in the rural areas. It was a disruption in the way people purchased things throughout the U.S.

Companies had to transform to meet the model Sears had created, or disappear. Many brick and mortar stores added catalogs and Sears grew even when faced with competition.

Then came the telephone! People had a new way to communicate. They could pick up a telephone, call a company and order something from that same catalog. Companies again had to transform themselves.

They needed to have a telephone — a telephone switchboard was even better. Companies had to hire switchboard operators to receive and forward the calls. The forwarded the calls had to go to someone. That meant hiring orders takers. Then they developed ways to offer credit.

Companies like Sears also still had the group that opened mail in addition to the group taking orders over the telephone: two groups taking orders, feeding a common group of pickers, packers and shippers. Companies were transforming themselves again based upon the technologies available.

Companies that did not adapt to these new ways of doing business had less market share or ceased to exist. We might call this an analog transformation. And Sears grew!

And somewhere around sixty to seventy years ago, the commercial computer arrives in the middle of all of this. Orders still arrived in the mail, by phone, and from outside sales representatives, but the extensive manual processes that managed all of that were giving way to automated processes.

Order sheets would be given to keypunch operators that would enter data, the data would be recorded on punch cards, thin pieces of cardboard. All of the cards would be placed in a sorter and checked for errors. Errors would be re-keyed and the process rerun.

Once "clean" the data would be loaded into the computer and massaged by programs that provided various reports. Companies added data processing departments, who used batch processes, to generate reports for accounting, manufacturing, order entry, picking, packing, shipping, etc. Suddenly new categories of jobs appeared: data processing manager, systems analyst, programmer, computer operator, keypunch operator. And the list goes on... Some might call this the first digital transformation. And the Sears IT department grew.

Dick Pick's product allowed for multiple terminals plugged into a single computer. Computer programs were easier to write, leading to the formation of application providers, especially VARs (Value Added Resellers). The application programs that ran on Pick's operating system allowed for online, real time, interactive verification of data, the checking of inventory, easy creation of reports, etc. and the elimination of paper cards. The Pick system was environmentally friendly! This was a major shift away from batch.

The Pick system could have hundreds if not thousands of terminals attached to a computer. Each terminal had an operator entering data that provided real time processes. Each terminal required a MV license. Companies had "farms" of people entering all kinds of data. Order entry clerks still had paper forms (orders) to enter. Customer service reps entered orders from customers on the phone. Some companies allowed their customers to place orders directly into the system via connected networks using modems. Since each connection required a MV license, the Pick market grew.

And then came the internet! The web also allowed customers to enter their own orders without dedicated connections. MultiValue databases VARs and end users had to figure out ways to get orders from customers over the web. There was no easy way to connect the web to the MV system. Early on many end-user companies used third party providers that published catalogs to the web and allowed customers to enter orders into third-party systems. The data would be batched overnight — we were back to batch — to the subscribing company and that data would be massaged by DataBasic programs to pick and fill orders, ship orders, and do all the other business steps.

As time went by this caused companies to lay off data entry clerks and cancel MV licenses. The web was replacing mail-in orders and phone orders with orders which were already in a digital format.

And that shrank the knowledge base. Aging and retiring programmers also contributed to companies leaving to go to non-MV application providers. As an aside, and in my opinion, the MV database providers did not and are not planning for the next wave of disruptions that are coming. Like all previous waves, those changes will be caused by the change in customer preferences as well as changes to current and future technologies.

Adding new backend languages, restful web services and .NET connectors doesn't make the adoption of modern technologies easy to use or learn! There is a learning curve and the requirement to do longhand coding.

There is the need for Agile Software Development (fast development times, easy app enhancement and app modifications) so that VARs and end-users could react to technological changes and market conditions. The VARs (creators of MV applications for sale using the MV database) must react to the market conditions their customers (users of MV applications) and their customers' customers — the buying public — live in!

The MultiValue technology from forty plus years ago is still the technology that MV developers rely upon today. Oh there are some advances into web and .NET connectivity but the basic underlying technology is still the same.

And as markets change the apps must change. The company using MV must find a way to quickly transform their application code in order to meet current and future market conditions and technologies. One way is to shift toward low-code solutions.

Apps developed by low-code platforms are the fastest growing segment in software. Along with low-code adoption comes new procedures and processes that invade all segments and departments of a company, not just IT - to understand this better, Google "citizen developer."

In MultiValue, we've always talked about user ownership of data, low-code/no-code is the move toward user ownership of code. The IT department is shifted, in this paradigm, from the keepers of data into the role of strategic differentiators. IT is finally being seen as a way to increase customer value, profit and market share. Low-code platforms provides a solution to the digital transformation (Google "digital transformation") that is disrupting current business processes.

Digital transformation, like every disruption before it, requires the adoption of new technologies. It impacts company cultures and processes. Disruption isn't easy because it changes the way a company conducts its business and that involves risk.

We see the Pick model as the world's best for writing business applications. At one time, it was. But it is no longer appears to be true. That battle is over.

We in the MultiValue world have not been successful in gaining a mass conversion of businesses from the SQL world. There are too few software development companies writing new MV apps. You will not find new development in MV applications coming from developers that began their software journey in the SQL world. And no matter what the MV database providers say about their efforts to recruit young blood, we do not have a high percentage of new (YOUNG) developers in the industry writing MV apps today.

What we can do however is extend the life of MV installed applications by doing today what the rest of the software development world is doing. We can create new apps and enhance our legacy apps by applying new methods to MV. The web, mobile and desktop apps we create can use MV data and mvBASIC, incorporating new and legacy code. Legacy apps can be modernized (in some cases replaced while still using the MV database). Low-code IS the quickest, easiest, least expensive and perhaps the only long-term solution for saving MV.

Market conditions are driven by customers and technologies. Employees also want apps that adopt modern technology to make their jobs more productive and easier. Customers seek ways to use apps as a portal into their vendor. They want it on mobile devices, their desktop and through the web.

According to Freshworks, 70% of customers globally prefer brands that provide service across multiple channels (email, chat, social, etc.) and multiple devices. It is not just IT that has to service that change, it is all departments that are being disrupted by the new technologies and customer requirements.

With all that said, MV software based end-user applications, application development companies, consultants, and the MV database providers themselves will go on forever. The MV platform is primarily used by small and medium businesses that have yet to be as heavily impacted by changes in market conditions and may never be fully impacted by the technology evolution.

These companies' internal MV applications are solid and they provide management with everything they need to run their business. Their greatest challenges may be in the programming backlogs that haunts every company and a shrinking programmer population.

A low-code platform also provides significantly more than just creating mobile apps and/or modernizing legacy applications in a fraction of the time of other methods. It means that a company can have a competitive advantage in their marketplace to quickly react to customer preferences, changes and adopt the newest software technologies. Low-code benefits include but are not limited to: 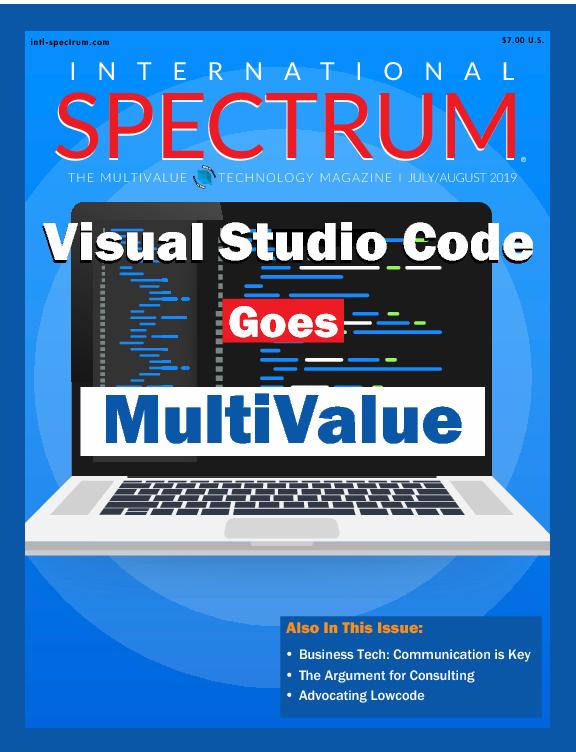