From the Inside March/April 2019

There has been an issue that our community has been battling for years: The perceived lack of entry and mid-level developers. We hear this all the time. "I can hire .NET/JAVA/etc. programmer directly out of college and they will already know how to do 'X'".

There is a critical problem in the IT industry but lack of MultiValue developers isn't it. Upper management is only now starting to acknowledge that software is complex, layered, and dependent on many different moving parts. The fact that this is a new revelation is the bigger problem.

No one can be an expert in everything. And that college kid probably doesn't know how to do 'X' beyond the limited cases of 'X' he or she has been exposed to in the academic setting.

Most entry-level developers know only one small aspect of IT, whether it is networking, windows development, web development, or mobile development. That's what makes them entry-level. To be fair, they might know it really well. However, once they get outside that arena, their lack of knowledge of other process or systems starts causing problems.

While software in general keeps getting more complex, when it comes to business software, the stakes are higher and the interconnections are deeper. Our systems get progressively more complicated due to all the layers of technology.

Modern business systems consist of desktop software, websites, mobile apps, reporting tools, data mining engines, and core systems. On top of that, we have connections to systems that your business doesn't control. Vendors, customers, value-added network, SaaS (Software as a Service) providers... they all fit into the jigsaw puzzle that is modern IT.

This layered approach to modern software systems means that companies have to hire entry-level people that are specialized in one area of development and then train them in the remaining segments of the business software. Whatever they bring to the table in the interview, they will need to add to that significantly to do the real work.

The question then becomes, why is it so are hard to find junior or entry-level developers or DBAs? Since it takes so long to bring new developers up to speed on the business practices, new hires are expected to have some knowledge and training in the environments they are hired to work in. We want them to have a chance to hit the ground running and provide value immediately.

This expectation makes it difficult or impossible to find the right people. New hires take time and money. Businesses expect other sources — previous jobs, college — to do this for them, and in turn expects that new developers just exist, like ripe fruit ready to be plucked.

This is an endemic problem in the IT world in general, not just the MultiValue world. Any business that is creating more than just simple web or mobile applications is having problems finding qualified developers.

Part of the solution comes from modifying management's expectations. We need them to partner with us in building well-rounded developers out of the pile of potential developers we see in interviews. And, there are other partners lining up to help.

Also remember that training opportunities exist. You may not have the time, patience, or expertise to bring that new hire up-to-speed by yourself. International Spectrum provides Mentoring to entry and mid-level developers so they can continue to enhance their skills, and provides a place to ask questions that senior developers intuitively know.

Many times there are new tools and procedures available now to solve problems, ones that outside experts may know, that are overlooked by senior developers that have been working on the same system for years. In addition to International Spectrum's webinars and conference, there are on-site trainers in our marketplace.

Remember that any developer you hire will likely have basic knowledge of the nuts and bolts of coding, and translating that into MultiValue languages is pretty easy. The struggle is in the "how do you use it effectively", "why do you use in one approach over another", and the "what in the world where they thinking" when someone new needs to modify a stable, decades-old piece of software that was developed using coding styles from twenty or thirty years ago.

It is very easy to bring additional value and modernization to your existing MultiValue system without losing the years and years of business logic and profit margin. We just need to adjust the expectations we place on our new hires. 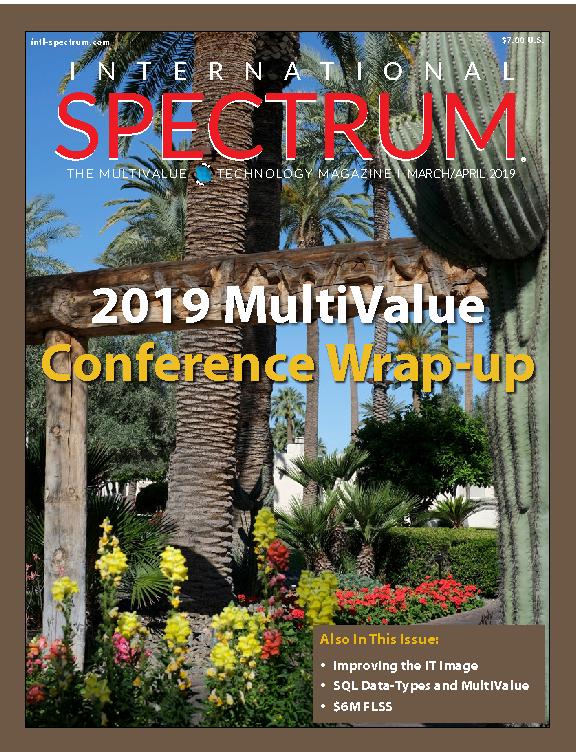