Clif Notes: The Ice Cream is Back!

The 2014 International Spectrum conference was held April 7-10. It was four days packed with developer technical classes, product demonstration and technical sessions, and tons of professional networking.

There was also the Exhibit Hall where you could talk to vendors about their products, examine new offerings, and network with the other attendees and vendors without having to cut your conversations short and dash off to another session. In addition to that, there was a very important element of the exhibit day that was missing from last year's conference.

The ice cream social is back!

Some of you may remember from my post-conference column last year that the ice cream had disappeared and had been replaced by popcorn. My comments were, um, not particularly glowing. Apparently the attendees at that conference were not particularly impressed either. So I am happy to report that the ice cream social returned to overwhelming applause.

I would like to squelch a rumor, however. There was some speculation going around that somehow my Clif Notes column had something to do with the ice cream returning. That is categorically not true. I had absolutely nothing to do with it. My opinion about whether or not it would be a good idea to drop the popcorn and go back to the ice cream was not solicited. Nor was there any anxiety on Nathan's part that if we were served popcorn, he would again end up as column fodder. Let's face it, my musings, ramblings, and rants are simply not that intimidating.

No. I think it was the torches, pitchforks, and cauldrons of boiling melted butter that got his attention.

Getting serious, I thought that the mix of topics for the daily sessions was very good this year. There were some repeats (including my own) of sessions that were presented previously. But there were a number of sessions on new topics. Now one might wonder why a conference would repeat the same sessions that had been done in a few previous conferences. Let me give you just a little bit of insight.

One of the complaints heard every year is that the sessions are only given at one time on one day. Of course, everybody wants every session to be available at a time that there are no other sessions that they also want to go to. That's understandable. The problem is there is no way to predict which sessions should be given double booking and which sessions should be dropped to make room for double and triple bookings in the schedule. And even at that, there are going to be some sessions that you have to choose between two or more sessions that you would like to be in simultaneously. The other problem is that if you turn away sessions with different topics to make room for the repeats, now you get complaints of "we're not coming back next year; it's always the same old sessions."

Then factor into this that the conference runs for two years in a row in one location and then runs for two years in a row in another location. In order to try to make the most number of topics available to people who come to a particular location two times, you want to repeat some of the better attended sessions from the previous year so that folks who couldn't attend a particular session due to a time conflict last year might have an opportunity to pick it up this year. But you also have to work in a mix of new sessions so that people who come two years in a row actually have some new valuable information presented. Otherwise they are just coming for the ice cream.

And then you move to the other location. Now what do you do? All new topics, thus denying the attendees who can only come to this location the opportunity to get the information from some of the sessions the previous year? Repeat all of the topics from last year so that the people who come every year have little to justify the travel and the cost other than a bowl of ice cream?

I think you can see where this rapidly becomes a rather complex problem in planning. Also realize that all of what I have just said are my suppositions of what some of the problems are. I have never been involved in planning a conference. So while looking at it from the outside of the process I can see how difficult it can be, I have no concept of all of the other factors such as number of session rooms needed, cost of breakout refreshments between sessions, cost of projection equipment per room, etc. And I imagine that even at that I have only scratched the surface.

Let's not even talk about the difficulties of finding knowledgeable people with information to share who are willing to stand up in front of a group and engage in an activity that strikes fear into the hearts of the majority of people polled in study after study - public speaking. For free.

So they have to look for the balance points, figure out which people have heard what and what they want to hear that they didn't get to hear, arrange the finances, reserve the location over a year in advance, and pull everything together. Of course, they should be able to write an optimization program to help in the process. All they need to do is learn how to predict human behavior.

I'm not holding my breath.

Wait a minute, we forgot about the exhibit hall. That needs to be booked. Vendors need to be solicited and signed up. And we have to order the ice cream. For how many people? What flavors? Toppings? Just thinking about all the details and the logistics makes my brain feel like it is on a continuous tilt a whirl ride! So I'm going to take the easy way out and simply say…

Thank you Nathan. Thank you Tracey. Thank you Howard, Kathy, and the management and staff at the hotel.

An excellent, fun, and informative conference… again. I am looking forward to next year.

In the meantime, everybody stay in touch with each other. Check out the groups available on LinkedIn, see who you can follow on Twitter, and other social media. There's no reason for any of you to feel like you're living alone on a desert island because you're working in MultiValue instead of some other platform. After all, it's not like we don't have the technology.

Now if you will excuse me, I'm going to go put on a white shirt and spill some ice cream on myself. (That always seems to happen.) 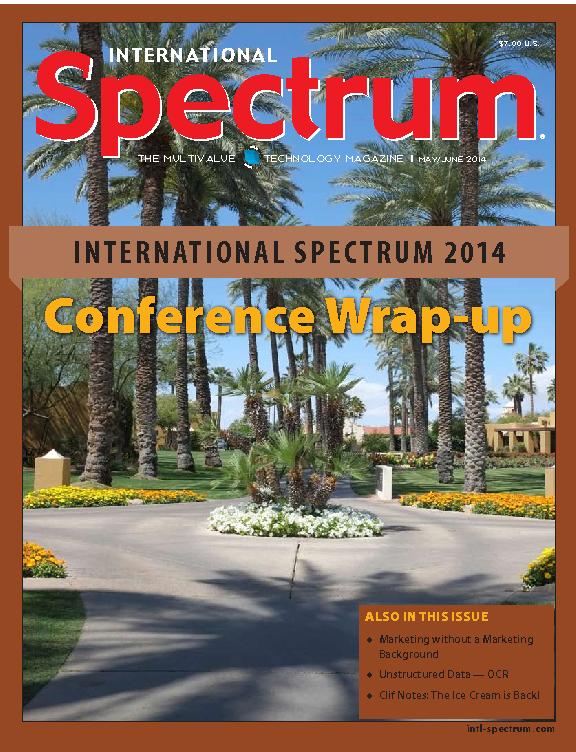